Over the last two days, we have walked. And walked. And walked.  It’s been hot, humid, and we have brushed shoulders, elbows, and umbrellas/parasols with more people than I even imagined seeing in a lifetime.  We checked out Tiananmen Square, The Forbidden City, The Temple of Heaven, The Silk Market, The Summer Palace, all in 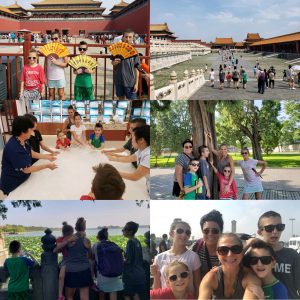 one day (along with about a million other tourists.) And these kids didn’t complain one bit.  Sure, there were a couple, “Are you sure that tour bus is going to pick us up at the end of this? We don’t have to walk all the way back right?” (And of course I said “Yes!” hoping that I was right, as I didn’t really want to walk all the way back either…) and some, “How many more places are we going??” but overall, I was seriously blown away by how resilient, perseverant, and downright pleasant my four little humans were.  I think this was especially evident because of the fact that we had two other kids on our tour, both neurotypical, seemingly without limitations, who complained a hell of a lot.

While all of us were exhausted at the end of the day, we still mustered the energy to get up the next morning, bright and early, to catch a tour to The Great Wall of China.  We were grateful that an early tour had been arranged, as the Wall ended up closing early that day, due to predicted heavy rains and a little mudslide potential, a crisis we were happy to avert.  Given that fact, we were not able to spend too much time there (and the fact that we had logged over 13,000 steps the day before,) we happily took the chair lift up to the top of the wall, as opposed to climbing up the stairs, which would have been about an hour long walk up, giving us very little time to explore the wall itself, (though, I personally would have preferred climbing the stairs, given my intense fear of heights.)  We nearly got the ride of a lifetime to take a toboggan ride down from the Wall, but that pesky rain started up and they closed the ride when we were literally the next ones in line.  We were all incredibly disappointed, however, the alternative was riding down the giant hill on a little piece of plastic without brakes, as the rain apparently renders them useless.  After hearing this, we settled for the safer ride in the chair lift back down, in order to li 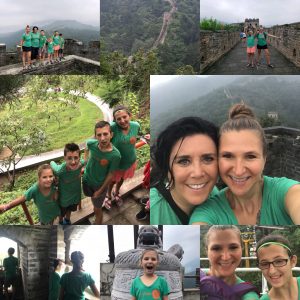 ve to tell the tale of our Great Wall adventures.

At the bottom of the Wall, we perused the souvenir stands, and this bamboo wall hanging caught the eyes of both Gigi and myself immediately, reading the words: “One who fails to reach the Great Wall is not a hero.” Oh, hell yeah.  This couldn’t be more true.  These kids are my heroes.  I never imagined that they would accomplish what they have thus far–and the trip is only halfway over at this point! I admire them every single day for having such dedication to everything they do, having hearts bigger than anyone on Earth, and having a curiosity about them that drives not only their learning, but also that lands our whole family in places like China on such wild adventures.

These moments….these small victories…these displays of personal heroism…walking 20, 531 steps over the course of 2 days, culminating at one of the 7 Wonders of the World, the Great Wall of China… this is what Make-a-Wish is all about, and for this, I am truly grateful.