When I’m supporting someone in a labor, I teach them to take a big inhale through their nose followed by an audible exhale through their mouth at the beginning of every contraction.  This is a sign to everyone in the room to stop talking, to not take their blood pressure, and/or to get into position for whatever comfort technique is needed to get through the next intense minute or so. During that contraction, I encourage them to take deep breaths, all the way down to their abdomen, much like we all used to as children but apparently ran out of time to as we became adults, and decided that breathing into the depth of our chest was sufficient. This ensures enough oxygen gets to the baby, the uterine muscle, as well as encouraging good alignment of the uterus, thus facilitating the labor progress.

As the contraction is beginning to subside, I tell them, “When this contraction is over, you’re going to take another deep breath in through your nose, followed by a big, loud exhale.” This accomplishes a few things. First, it assures them that the contraction will, in fact, end, giving the concrete “WHEN” since their mind is caught up in the “IF,” as many a birthing person feels that there is not an end in sight, and that their labor will go on forever.  It also allows for a deep release of tension from the body, and the louder the exhale, the more tension that escapes. (I extend the challenge to each of you reading this to give this a try, and you will see how amazing it feels.) The last thing achieved with this overly audible exhale is it creates the space for a pause, a break, as the body needs this time to rest and simultaneously build strength to prepare for the next intense contraction that will likely come in just a few minutes.

We are now over three weeks into our hospital ICU stay, and we still have no end in sight. While I am fairly sure that the worst is behind us, and things are looking up, one should never get too comfortable in situations like this. So, instead of focusing on when exactly we will find ourselves out of the confines of these four walls, when this labor of healing will be over, when the next part of life will begin, I am finding ways to take those big, loud exhales in order to prepare for the next thing to come, knowing that each step is taking us closer to the end, just like each contraction.

Last Wednesday, Giacomo was still quite sedated, however, the discussion came up to have him start using what is known as a Passy-Muir speaking valve, which actually does a bunch of amazing things to redirect airflow, in addition to allowing him to speak. It allows him to be off of the ventilator and take in air from his environment and actually moves it through his airway himself. This had been a thing that was mentioned as an “at some point” kind of a deal. Honestly, I had my reservations initially because he was so sedated, and I may have just a small about of PTSD surrounding experiments that involve my son being taken off of his ventilation support. 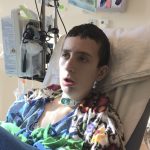 We initially attempted this off-the-ventilator trial during an alert time and got a range of 30 seconds to 2.5 minutes at his best effort. I was cautiously optimistic, partly from my whole self-identified PTSD, and partly from the fact that we started this experiment on Wednesday afternoon, just prior to me having to go and teach my training for the next four days following. I spoke with the staff about the importance of letting him take the lead with how much time he was on it, listening to him when he said he had enough, and not pushing it, as I know the guy well enough to know that sometimes excessive encouragement beyond his desires can completely backfire.

In all the days that followed, everyone has adhered to the “follow Giacomo’s lead” plan, as opposed to the “every x hours for y amount of time,” off of the vent, which led to wild success.  He has now been off of the ventilator using the speaking valve for over 2 hours at a time on occasion, though has also had moments of only tolerating it for 5 minutes.  I think letting him guide us is allowing him to feel comfortable with this new way of breathing and living, so much so, that he even spoke his very first words in three weeks, while still on the ventilator yesterday, first waking up and inquiring, “Where are my clothes??!” (He had wanted his gown off in a hot flash overnight and was just in his hospital skivvies at the moment.) It reminded me a little of his first word as a baby, which was not the “mama” I had hoped for, but 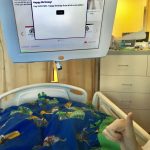 er the practical word “fan,” his favorite object to stare at on the ceiling. “Mama” did follow eventually, which was almost as exciting and heartwarming as the only other words he has truly spoken, “I love you too, Mom,” which I got later as a response to me saying, “I love you” to him, for.a least the millionth time since we’ve been here. Ahhh…..big, loud exhale…my boy is still here AND he still loves me, during this rough time in which he has not only endured so much but also spent his 15th birthday in the hospital. This birthday was spent alternating between rest and activity, including not one, but TWO actual walks outside his room! With the assistance of a walker and a wheelchair for back-up, Giacomo retreated back to those huge infant milestones and took his first steps. Another big, loud, exhale from this tiger mama, watching her cub find his footing once again.

This past weekend, I did have to work and teach during the day. I got messages and updates of Giacomo’s progress, being on the valve, sitting up in bed, and even standing at one point.  While I had hoped for quiet calm nights, full of rest for both of us given our busy days, instead I got the thing that some babies do to their parents when they go back to work–a kid who wanted to party all night long and spend time with me, as he had clearly been missing me while I was away.  G’s partying consisted of basically not sleeping for two nights, insisting that I sit by his side, rolling around in bed, kicking his feet towards me all night long for me to massage, alternating one then the next, vomiting, pulling at his trach tube, and overall just being one giant wild ball of withdrawal.  Lucky for my students, I can literally teach a doula training in my sleep, because I’m pretty sure there were moments I was doing just that. Needless to say, once that class was over at 6:00 on Sunday night, I let out a pretty big and a pretty loud exhale, as a sigh of relief, but also in prepping for the next phase of Operation: Get Out of the Hospital. 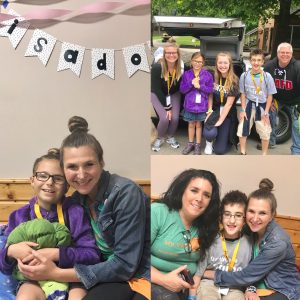 I will have to back up just a little as well and give credit to the exhale and pause that several of us were given on Sunday afternoon.  My dear friend and fellow doula, Bee, took over my class for a few hours to allow Gigi and I to be able to take Lūck and Isadora to the Muscular Dystrophy Associaton Summer Camp. Every June, for the last 8 years, I have dropped off 1-4 kiddos at that camp, and I am so grateful that, in spite of all of this crazy chaos at the moment, I was still able to take part in this sacred mom moment.  On the drive there, we caught up on how things have been going, giving them (and really myself) another resilience pep talk, and they chattered about all of the fun things that they were going to do at camp. When we arrived, I fought back tears of joy the entire time, as we were embraced by our MDA family, many who have known the kids for years, some who are brand new, and all of whom are aware of everything going on in our lives right now and want to do nothing but support us, give these kiddos a much-needed break and distraction from their lives, and send us love, healing, and positive energy.  EXHALE.

This brings me now to my other child, Gianna. Last Friday, she embarked on a 4-day, 100+ mile bike trip. This is the third and final “Key Experience” for the 7th and 8th graders at Great River School. I had nothing but absolute faith in her and the support team with her that I knew would be loving and encouraging her throughout this huge challenge, easily the biggest one of her almost 13 years o 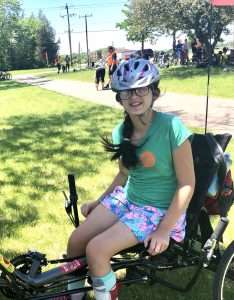 f life. While she took with her a small amount of nervousness, she also brought with her the innocent joy and naive excitement that comes with some of her cognitive deficit and impaired executive functioning, which is related to the myotonic dystrophy, seemingly more thrilled at the idea of being with her friends for four days in a row, than even thinking about what those four rigorous days of biking, camping, and being in the elements would entail. Ultimately, from what I could tell from the text updates and photos I got over the weekend, the smile on her face when she rode into Brackett Park, endless telling of bike trip stories last night, and the contagious tears of pride that flowed from the support staff that biked right alongside her on her journey, and now keep flowing from my eyes as I type this, I’d say there is some pretty strong evidence that Gianna completely and utterly rocked the GRS Bike Trip 2019. Big. Loud. Tearful. Exhale.

And so here we sit. Ready to face another day here at the University of Minnesota Children’s Hospital. Ready to continue to inhale and exhale, sometimes bigger and louder, to heal, to improve, and to move on to the next intense part of life, because even though there will be, at some point, an end to our time here, the labor will be far from over, and we will need to continue to find these deep breaths as we move through it.