The last few days have been a bit volatile, to say the least, with some of the biggest highs followed by some significant lows. All of these events have been due to the ongoing very non-linear and sometimes messy place that we are at, as we work towards getting Giacomo fully off sedation and on the rehab road, which involves this intricate yet haphazard tweaking of G’s cocktails of medications that should ultimately get us home at some undetermined time, or as Gianna wrote on his board, under “Anticipated Discharge Date: We don’t know.” She also added her goals for him, “Stay Helthy, carful, and be brave.” Excellent.  This is precisely what I need–as these docs are, in essence, playing bartender with these meds to get my guy healthy again, I need them to be careful and understand his underlying condition in order to keep him safe, and I also need G to be brave as he continues down this incredibly unknown path of recovery. 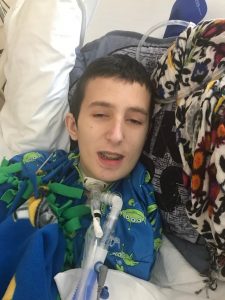 For the last three days, I would say that he has been working super hard on those goals, as G has gotten out of bed and really “stirred his blood,” as my Grandma Rose would have called it, were she still alive. He’s gone for few walks, every time off of the ventilator and solely on the speaking valve, followed by long-ish periods of time sitting up in the chair, building some Harry Potter Legos, playing a brief game of Uno, or watching TV with his feet propped up on the end of his bed, much like his mama who sits in a very similar fashion for many hours, day and night.  He has also had some solid quality time with Gianna while the other two have been at MDA camp this week which has helped with the blood-stirring, even just in his face, as just by being her normal silly self, she prompted G to crack the most enormous smile we’ve witnessed
thus far, and I’m positive it would have been a deep belly laugh, had he had the capability to get more airflow through his vocal cords. As she was leaving, she commented, “Mom, it was really important that I was here today for Giacomo so that I could keep him safe.

Yesterday she participated in the changing of his main trach tube, assigned the task of standing near 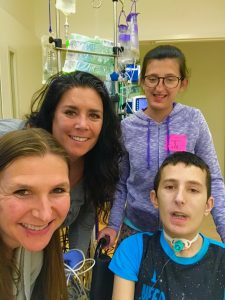 his head and offering words of encouragement. Though she was initially worried to be in the room, I explained to her that all of this is going to become part of our everyday life at home, and also that she really didn’t need to worry since her job was not anything that could hurt him, only help him. I found these to be healthy fears, as she has always been his main protector, and I think it is important for her to understand what is happening with him and to see that he was safe and being well cared for. Once she got over those initial concerns, she jumped right in, and then excitedly took the next incredibly important job of pushing the wheelchair behind him on our walk, in order to catch him as soon as he was tired out, which technically is a job she could have potentially hurt him should she not act fast when he was no longer feeling like walking. Luckily, he listened to her “Sit!” command very well, and only sat when instructed to. He also was incredibly motivated by my song choice for him, “Eye of the Tiger,” actually revving up the handlebars of the walker to get himself going.

After these productive days, I had hoped for my guy to be very tired and fall into a deep sleep once the sun has set. He, apparently, had other plans. Now, I will say that for the vast majority of the time spent here, evenings and nights have not been his strong suit. We have been battling what I (and some of the doctors and most of the nurses) believe to be withdrawal from these sedation meds. (And yes, there is more to that previous parenthetical comment about everyone’s varying feelings on withdrawal that I will elaborate on in a separate post.) The whole thing has been a crazy juggling act, but none of us were prepared for the insanity that ensued last night, just as he should have been catching some z’s for the night. Instead of that, he was bolting upright roughly every 87 seconds, trying to pull out his trach tube and PICC line (something you may recall he did successfully do once before in his sleep,) and incessantly removing his greatest irritation and arch nemesis of this entire hospital stay–the pulse oximeter.

He was able to identify that he was sad, frustrated, and scared, but then all those intense feelings turned to panic, which led not only him not only attempting to sabotage his health care, but also those caring for him. He listened to no one and lashed out at everyone. Though I was able to calm him periodically, eventually even I was no good for him, as each of us at his bedside was subject to his hitting and aggressive behaviors. Those of you who know him, know that he is so much more of a lover than a fighter, and it was against everything in my being to raise my voice to my kiddo who has been trapped here in this hospital, now fallen victim to the unintended consequences and side effects of everything that needed to happen here. However, I felt I had no choice. Over and over again, I had to scold him, sometimes also physically restraining him, “No, Giacomo! You have to lay down! No! You can’t pull that out! No! That is helping you breathe! You have to leave it in!”

It was sad. It was frustrating. It was scary.

We turned to the doctors, who often conveniently walked into the room when he was perfectly calm, and even asleep, between his wild fits of rage and panic. Despite them not witnessing the fury in the same way that we were, they listened. They listened to the nurse who said, “This is NOT okay!.” They listened to me when I said, “This is NOT safe!” After he vomited again, which meant that he lost an undermined amount of the anti-anxiety, pain relieving, and anti-nausea medications designed to treat this whole debacle, they listened when I asked if they could please move as many of his meds to be administered via IV. They listened when I asked them to be his personal bartender and whip up a cocktail that would allow him to safely make it through the night, with minimal panic and pain, in addition to obtaining the much-needed sleep he had been deprived of. And mix they did, even going so far as to do a little air-shaker motion, after coming up with their special combo that included scheduling meds to prevent fires from starting instead of putting out the blaze we had been dealing with.

After near bar close on Tuesday night, into the wee hours of Wednesday morning, G finally was able to calm down and find rest. Yesterday was our first vomit-free day in a week, which is good, as he continues to lose weight every single day, having now lost the majority of the weight he had gained after the G-Tube was put in last fall, so we need every single calorie to stay in his body. He fell asleep at 5:30 yesterday late afternoon and he slept. (Mostly) All. Night. Long (with a few brief wakings.) Safely (which is really what counts.) Today he’s enjoying this same cocktail of drugs throughout the day, which has significantly improved his mood, inspiring an even longer walk down to the lounge on this floor, some smiles, and a thumbs-up followed by an exploding fist bump for me, just now when I asked how he was doing. If I can 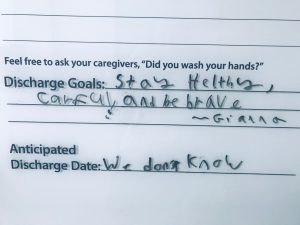 remember everything correctly, he’s on Tylenol, Morphine, and Toradol for discomfort, Zyprexa and increased Prozac for his mental health, Clonidine (which is a blood pressure medication we are using for its calming effects,) and Zofran and Benadryl to curb nausea. This is in addition to his daily probiotics and Protonix for digestion, and a vitamin D to round things out.   While the addition of more drugs feels like a little bit of a backslide, given their effects of G being able to achieve Gianna’s goals for him, translated to “Stay healthy, careful, and be brave,” I’ll take it.