Delirium in the ICU

Fifteen, going on sixteen days ago, right around this time, I shed some of the only tears that have left my eyes in any large volume since we’ve been here. These were the tears of frustration and pleading to the doctor formally known as Giacomo’s pulmonologist to not extubate him with her plan to miraculously and instantaneously transform him into a nose-breather, a plan I have since learned that she herself only believed had a 50/50 shot of working, yet still insisted needed to happen. Honestly, the tears shocked me, as I typically hold it together quite well, even in times of stress. For a moment, I felt like that crazy, overreactive, dramatic mother that so many people–medical professionals, family, and (former) friends–made me out to be over the years. Through ugly sobs, I reminded her, “This surgery was supposed to improve his quality of life!! You need to make sure that he has a life after all of this!” Her assurance and insistence that she was right and I was wrong only intensified my feelings of personal insanity.

Now, if you’ve been following along, you’ll know that I was not, in fact, suffering from any part of ICU delirium or crazy-mom syndrome, but rather one of my most profound moments of maternal instinct with this child, followed only by the years I spent knowing that something was wrong with him, going to dozens of providers to seek out an answer, prior to getting the myotonic dystrophy diagnosis. It is this same instinct that has guided me to resist certain medications that have been part of sedation/anti-delirium plan that my gut told me would have negative effects, which would later turn out to have the opposite intended consequence and produce even more bouts of anger/pyschosis for my guy. Though staying in the confines of this hospital room for over two weeks has led to a surreal blur of time, it has not created any form of delirium in me as his mother, but rather has given me a clarity and a self-confidence in speaking to all of the doctors, nurses, and providers who listen to my expressed concerns, as we are now working very well together to get Giacomo healthy, awake, and eventually able to walk out of these doors on his own two feet. 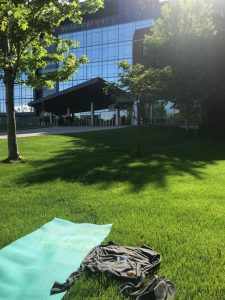 Finding and asserting my voice as his caregiver is only one piece of my warding off of ICU delirium. I have continued to roll out my yoga mat to find my breath and stretch out the tightness of my near-constant sitting in the same blue chair right next to G’s bedside, gotten outside to take in the fresh almost-summer air and rays of the sun on most days, even for just a few minutes. I am grounded by the visitors who come bearing gifts of meals, necessary bars of chocolate, coffee, and hugs. I am kept sane by the incredible people I have met as part of this hospital staff, as well as with the check-ins via text, message, or phone calls from the people I love and hold dear to me in the outside world, plus all of the positivity, prayers, healing energy, good vibes, thoughts, and well-wishes we are getting constantly. And every moment I get with my other three kiddos is a recharge, but also an amazing reminder of how damn resilient they are during this crazy journey. I am keeping my eye on the prize of the day that we all are back together under one roof.

So while I have a clear head, albeit a sleep-deprived one, my boy has been teetering on the balance of sanity. His ICU delirium set in about 5 days into our stint here, when he first started pointing at things that weren’t there, followed by some very intense and clearly disturbed feelings about a painting of a nondescript animal outside his door.  Is it an anteater? An elephant? Snuffalapagus? Whatever it is, it’s a little trippy when you are not on any mind-altering substances, so I can only imagine how he feels. And his buddy, the lion to the right, is equally odd, as it appears to be tripping as well. I believe we have finally remedied the situation with strategically placed artwork taped to his door, including this fabulous sticker mosaic tiger that Lūck and I created the other day, offering additional protection to G when the psychosis sets in. In addition, the staff here loves him so much, they are looking into getting the picture, which is strongly adhered to the wall, moved for him, as apparently, he is not the first kid with complaints about the 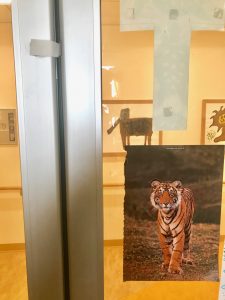 Overall, he is stable and doing really well with his new tracheostomy tube, which had its first big change today and seems to be in great shape. Up next is to get him out of this ICU delirium solidly by slowly weaning him from all of the drugs of sedation first. He has been on a steady drip of them, along with the strong narcotic, Fentanyl, for over two weeks now, so it will have to be a gradual thing, especially after his most psychotic moment of the last weeks, in which I woke up early this morning to all of his alarms sounding, alarms I have been trying to desensitize myself to, with the knowledge that someone is keeping an eye on him should he do anything crazy. Well, apparently, those eyes stepped away to do a task for another patient, and as the alarms woke me, looking over and seeing Giacomo with one foot on the floor, trying to escape, I literally lept from my pull-out chair bed. I got him to lie back on the bed, frantically flagged down a nurse, and worked to get him sorted out, as he had also pulled out the central line that was administering all his sedation meds. He was wide awake, wider awake than desired by all of us, and when I asked him what he was doing and reminded him that he could not just jump out of bed, he gave me a very G-typical shrug that I have seen dozens of times when he does something without fully thinking through the consequences. While it was a little fun, on the one hand, to see my boy again in more normal capacities, my fears of the abrupt sedation ending were soon realized, as he started withdrawing almost immediately with intense vomiting and tremors. Needless to say, everyone worked pretty fast to get the drugs back in his system, as there is a weaning plan for a reason, the reason being to avoid withdrawal as much as possible. He is now labeled (by me) a “flight risk” and the staff here understand that he needs constant and awake supervision.

Now that the trach is on the way to healing, he is no longer on forced bed rest, which should help get rid of this delirium in the days to come. Today we actually got him sitting on the side of the bed for about 1.5 minutes before he crashed and had to sleep for the rest of the afternoon and evening. It’s progress, but I think pretty indicative of just how much his body is affected by everything that has happened to him since May 20. He also got to go for a fun ride on this lift today in order to zero out his bed, which has a built-in scale. While he looks like he’s relaxed and along for the ride, a few minutes prior, he was reaching to do what appeared to be a pull-up on the bars. I don’t believe he’s quite 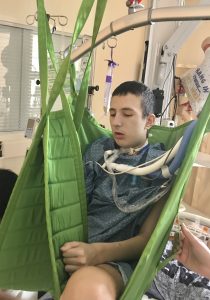 ready for pull-ups, but we are going to keep working each day on building his physical strength, followed by his respiratory strength, with the plan to hopefully wean him off the ventilator, at least for daytime support, as he’s been on a ventilation support at night for over 3 years, so I wouldn’t expect that to change. I’ve got an incredible doc on his team now who specializes in pain control and keeping kiddos comfortable. He spent a long time chatting with me today to get to know G and our family a little more, which is allowing him to make a safe and comfortable plan for getting G awake and not hallucinating.

Keep sending all the goodness over here to the four walls of this pseudo-suite within the four walls of this fancy hospital–we are needing every speck of it to make this ICU delirium and its root causes a thing of the past and know that we are crazy grateful (pun intended) for everything that our community has done and continues to do to keep us all sane!