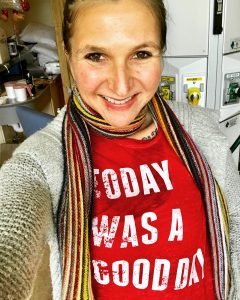 I put this shirt on this morning in the hopes that it would be a good omen and prophecy, after a couple of long crazy nights with high temperatures, multiple antibiotic changes, and sedation-medication-tweaking. I don’t want to curse the night, but so far, so good. He spent a restful day healing, alleviating some congestion off those lungs with some diuretics and warding off more infection. We skipped the physical therapy and sitting up a whole lot to protect his critical airway from potential wild behavior like the spontaneous sitting up, trying to pull out his intubation tube, and attempts to leap out of bed that were part of his overnight antics. He got a PICC line placed, which means less pokes and easier access should this guy throw some more curveballs into his next couple of weeks here in the ICU. Oh, and that pulmonologist who made the call to recommend against the tracheostomy tube post-surgery in the first place finally stopped by for a visit. We had a lengthy conversation that unfortunately did not start with the two words that I needed to hear first—“I’m sorry.” It also included a little too much of her justifying her own behavior for my liking, in addition to her saying that she thought he had about a 50/50 chance of breathing on her nasal mask/BiPAP plan. I reminded her that 50% is actually a failing grade, and that it was really unfortunate she had made him an experiment that I knew would be a failure, especially without even talking to me in the first place. As I’m sure you can all imagine, I had a LOT more to say, including, “Yes, I would like to have a meeting with patient relations.” And for the record, I want that meeting for the sole purpose of being an agent of change, to raise awareness of the importance of actually listening to caregivers, and ensuring that what we have endured NEVER happens to another family. So yes, I would say that today was a good day.