I’ve said it a million times–Food is love.  Food is what we do to show our love, to celebrate, to join together with friends and family, and the one thing that unifies us all as human beings, given the fact that we all eat, and across cultures, food plays a significant role. So, when the grandest part of Gianna’s Wish on this trip to China was to learn how to cook Chinese food, I knew that I, in order to show how much I love her, needed to make that happen. Initially when she requested this, I was unsure as to how that might actually happen, but as it turns out, she is not the only tourist to desire such a thing, and I was able scrounge up, not one, but TWO different cooking classes for us to become pseudo-Chinese chefs. 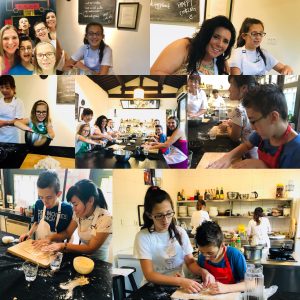 Getting to the classes, in and of itself, was actually quite interesting.  Both classes took place in the Hutong area of Beijing, which is the traditional housing area, made up of old 2-3 room homes around central courtyards, some of which are actually part of old palaces. There are narrow winding streets to take you into the depths of the Hutong where the classes were held within these tiny homes/restaurants/mini cooking schools.  For this adventure, we opted to let the hotel arrange an Uber-like van to transport as opposed to taking the subway, knowing that part of our journey was actually finding the destination, as the van could only drop us off at the entrance of the Hutong area from the street and we went the rest of the way on foot.

For the first class, we were going only by a picture of an ornate red door with the number 28 on it that the hotel concierge had shown us, as the actual name of the place, “The Black Sesame” was nowhere in sight.  We found the matching door and gave a few big knocks with th 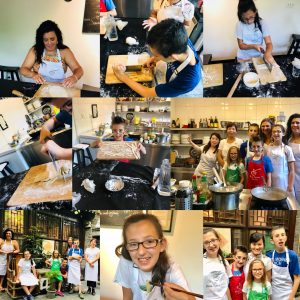 e metal door knocker, and after a few minutes, an adorable young woman named Coco greeted us and led us into the courtyard just outside the tiny cooking area where we would soon become noodle-making experts.

We all donned our aprons and got right to work mixing and kneading the dough, working it into the smoothest ball of flour and water I have ever seen.  Before long, all six of us were rolling, folding, and slicing our own homemade noodles, as the two sauces—pork belly with eggplant and tomato with egg—simmered on the stove, tempting us, as well as encouraging us to hurry up with the noodles so we could sample our creations, which also included making some “cat ear” noodles as well (and not to worry—no cats were actually harmed or used in the making of them.) As fun as making the noodles was, eating them was undoubtedly the best part, and all of us gorged ourselves on seconds (and thirds!) We did get to keep our aprons, so my hope is that we can bring some of that noodle magic home, channel a little of Coco’s energy, and recreate our masterpieces! 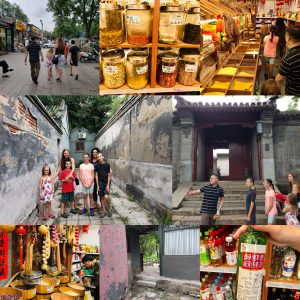 Our second class was seriously the most incredible way to end our Chinese adventure, starting off by meeting our instructor and owner of the Beijinger Kitchen cooking school, Carlyle, at the entrance to the Hutong.  From there, he took us to a traditional Chinese market to learn about all of the ingredients for the foods we would be preparing.  There was something so captivating and intriguing to learn about all of the different beans, vegetables, and dried flowers used to create balance in the body, between hot and cold, energy and fatigue.  I have known about some of this from my very basic knowledge of Chinese Medicine, but to actually SEE it being put into the everyday essential of food was completely different.  That, along with about 75 different kinds of soy sauce, vats of peanut and sesame sauce being ladeled into jars for shoppers, spotted duck eggs, and fresh peaches that were just about as big as my face, was completely fascinating.

After the market, Carlyle led us to the school, through a beautiful Hutong, as quietly as possible, so as to not disturb all of the older people living there.  See, there is quite a difference between this part of Beijing and the rest of the bustling high-rise apartments where so many of the Bejingers live.  There is a peace and a tranquility that would not lead you to believe that you are nestled in the middle of a bustling metropolis of 24 million people, that really seems to never sleep, and not in the Vegas kind of way.  Here, in the Hutong, people enjoy their retirement (at age 55 for women, and 65 for men) and spend their days cooking and eating tasty traditional food and playing cards, so we did our very best not to interfere with the calm there.

Once into the school, which was, in reality two little rooms and a tiny kitchen that had been gifted to Carlyle by his grandfather to open his business, we were greeted by the gourmet chef who would impart his wisdom and skills on us for the evening.  On our menu was making homemade dumplings (and here is where our previous noodle experience was a bit handy!), Kung Pao chicken, sweet and sour chicken (yes, the kids were in heaven!), star-cut sautéed mushrooms, and a cucumber tower made with fancy spiral cut cucumbers that we sliced ourselves!  We enjoyed the fruits of our labor and all won the “prize” by discovering a dumpling with the special peanut hidden inside (traditionally, they used to actually put a coin inside for the prize dumpling, but apparently that posed a choking hazard, and given the fact that I’ve already had one kid have surgery to remove a swallowed quarter in my lifetime, a peanut was a great substitute.) 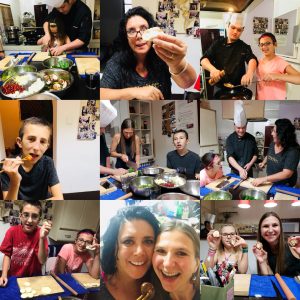 The prize??  A set of chopsticks and a spoon for each of us! This couldn’t have been more perfect, as I had planned to get both of these for us as souvenirs—the chopsticks to work on our skills, in general, and because we learned that eating with chopsticks creates a sense of friendship, kinship, and community, which is something the six of us cherish as a family.  The spoons? Truthfully because over the course of our trip, we played cards together just about every night and I taught the kids the fantastic game of “Spoons,” which became an instant family classic. They are looking forward to playing with actual spoons, as we have been playing with folded cocktail napkins, given the fact that we were staying in a swanky hotel with fancy marble tables, so I thought better than calling more attention to ourselves by a rowdy, noisy game of clanking metal spoons.

This last evening in China with our class at the Beijinger Kitchen was truly the culmination of our entire adventure here—the culture, the wisdom, the people, the food, the laughter, the trying of new things, the and the unforgettable time spent together as a family. I am so grateful for all that the Make-a-Wish organization did to make this trip possible, and also that Gianna chose this for her Wish, as I don’t think I would have ever traveled to China otherwise. We are leaving here with open eyes, full bellies, and warm hearts, and, once again, living proof that food is love.