Have Myotonic Dystrophy, Will Travel… 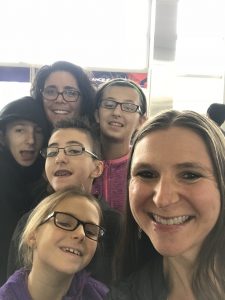 When it comes to my kids, like most parents, I want what is best for them.  Granted, all parents have a different definition of what exactly that means, but, for me, part of the “best” is giving them every opportunity to explore the world and experience new things.  See, when I got their diagnoses of myotonic dystrophy, going on 8 years ago, I made a promise to myself and to them that we would travel. We would stamp the heck of of their passports.  We would visit every continent (alright, maybe skip Antarctica, because let’s be real—we live in Minnesota, which is enough tundra for me.) We would jump over waves in as many bodies of water as their bodies could handle. We would actually see, with our actual eyeballs, the things, people, and places that they saw on TV, read in books, and learned about in school.  So far, I think we’re doing pretty good having road-tripped to the coasts of the US multiple times, headed north to our Canadian neighbor, in addition to trips to Italy, New Zealand, Guatemala, and Costa Rica times 2.

How does all this travel happen?  Well, a few different ways—first, it’s about work.  I specifically chose paths in my career as a birth professional that had international credentials, meaning I can go and teach a training in another country, bring my family along, I work a little, then we play a little, and, in essence, I get the only “paid vacation” I will ever experience as a small business owner/entrepreneur. Second, it’s about priority-setting, and realizing that sometimes, in life, when you have kids with a degenerative neuromuscular disorder, in addition to a baby that just had heart surgery, and you find a deal on plane tickets to New Zealand, you pull out a credit card in order to take your kids there to visit family for a month. It’s about making these trips happen today because, for all of us, there may be no tomorrow. I have the blessing of knowing that their tomorrows are limited, their abilities will decline, and traveling to some places will become increasingly more difficult as time goes by, which inspires me to take these trips now.  Worst case scenario? It’s their only time going to some of these places.  Best case scenario? We go again, exploring new adventures every time.

In addition, some of this travel is made possible by an amazing organization called Make-a-Wish, which facilitates the dreams of kiddos who have life-threatening illnesses.  Now, just for quick clarification, many people think that Make-a-Wish is for kids who are dying from cancer or the like, however, the organization is actually part of the living process, the thriving process (and to refresh your mind as to what My-Vida is all about, it’s thriving in the dash that constitutes your life,) and many kids who receive wishes have improved health, physically, emotionally, and mentally, after being a part of the experience.  Oh, and know that it’s not just about Disney World either—case in point: our trip to Italy was to achieve Giacomo’s grand desire to see mummies in Palermo and Pompeii (look for another post about climbing Mt. Vesuvius too…)

Which brings us to the present moment…en route to Beijing, China, to fulfill Gianna’s dream, made possible by the generosity and support of Make-a-Wish.  Why China, you ask? Honestly we have no clue, but in keeping with her very random through processes, after talking for some time about going to Costa Rica, during the wish-granting process Gianna changed her mind and debated between going to Texas and going to China. There was some influence, we believe, from an episode of Arthur on PBS, in addition to her love for Chinese food (and yes, we have told her multiple times that food in China is NOT what she finds at the Chinese Buffet in our neighborhood.) But either way, she has had her mind set on this and has not strayed from her dream in the nearly two years that this trip has been in the making. We are slated for a trip to the Great Wall, along with hopes of taking in some cooking classes so perhaps she can enjoy preparing some REAL Chinese food back in the US, as well as checking out some pandas.

Our adventure will be a week long, and all documented here, as we will be completely shut off from social media, which is banned in China, as well as my Gmail account and all it’s Google counterparts.  While this was initially panic-provoking in me, I am now very much looking forward to this break, the ability to spend time with my family, as well as a few moments to focus on this next path in my life….My-Vida!  Stay tuned for our travel updates!