So, there’s a lot going on right now. A lot. I’ve had just about every metaphor for this excessive goings-on tossed in my direction–I’ve got irons in the fire, balls being juggled in the air, plates spinning, my hands full, as well as my plate full. On the whole, I’m staying positive and am listening to lots of encouraging words, many of them from myself, to remember that with all of those irons, balls, and plates doing their thing, this, too, shall pass, this won’t last forever, there is a light at the end of the tunnel, and the only way out is through, one of my favorite lines I use while supporting someone in the great unknown of labor and birth, because let’s face it–just about everything in life relates to birth.

Some might say and have said, that this is an emotional rollercoaster for all of us, but I’m begging to differ on that one.  A rollercoaster has a clear beginning and an end, both of which are typically at the same spot and also able to be seen from the onset, In addition, the vast majority of the time, the entire rollercoaster is visible to potential riders from the ground, offering the luxury of seeing the twists, turns, occasions to be completely flipped upside down, and allows one to make a fairly informed decision as to whether or not to get on and ride in the first place. Oh, and the whole thing is likely not more than a few minutes in duration, from start to finish. No matter how crazy it gets, how scared you might feel, or how many screams you hear, the whole ride is over pretty darn quick.

No, my friends, this is not an emotional rollercoaster.  It’s a maze. A long, complicated, intricate, and lonely maze. The walls are high and there’s not a chance to see over them.  I have no clue where the end is and, even more frustrating, I have no idea how I’m going to get there. There are so many dark and winding turns, so many obstacles that force me backward when all I long to do is to make forward progress. Oh, and I’m not in the maze alone. I’m wandering through this thing with all four of my children. And we didn’t all come in at the same starting point, yet I’m pretty sure, or at least I’m desperately hoping so, that we’re all going to end up at the finish line together.

Once in a while, whilst walking through this maze of the last month, our paths have all intersected, and we have met for a brief moment to regroup, but it’s still not the same since this isn’t normal to be in this maze. None of us are truly ourselves. At times, we are have all put on some sort of costume or another to give the outward appearance of being okay. Some of us can’t really even speak. And some of us don’t know what to say. We have so many questions and almost no answers. We don’t belong here. We don’t belong in this maze. We belong at our dining room table, eating dinner, and laughing until at least one of us is crying, and my only worry is whether or not someone is going to choke on their food due to the uncontrollable laughter. Yet, we may never sit at that table together again in that same way, because even when we get to the end of the maze, the life on the end of it is not at all the life we were living at the beginning of the maze.

Though I have a pretty good sense of how each of these people walking through the maze are truly feeling, I obviously cannot speak for any of them, so if you’re reading this, and happen to run into Isadora, Lūck, or Gianna, do me a favor and check in with them to at least give them a chance to ask some questions, encourage them to share a feeling or twenty, and give them a hug. A long and a big one. Help them to stop running into that wall, back them up, and see if you can’t get them to find their own way out of this crazy, dark, winding tunnel. I am doing my best, but it’s really hard when we are all not in the same physical place and we are all going through the same experience, but in completely different ways. Remind them how strong they are, how much courage they have, how much they are loved, and that they are building, sharing, and inspiring the most important thing in life–resilience.

As for Giacomo, you could definitely offer up those same maze-alleviating supports, but if you want a baseline as to how to start, here’s where he’s at, as he’s relayed to me. G is sad. Granted, these last few days are NOTHING like the sadness and dark cloud that enveloped him late Saturday afternoon through late Monday afternoon, when he sobbed, balled himself up into the fetal position, and had a nearly constant stream of tears. (Remember my prediction from the previous post about a big release in him coming, shortly after mine?? Yep. I was right about that too.)  He’s not sad about having the trach tube. He’s not sad about the debacle that led him to get that trach tube and that whole near-death experience. He’s not even entirely sad about being here in the hospital. He’s sad about not knowing how much longer he has to be here. And he’s the saddest about not being able to talk. Though we’re working on getting a few words and the occasional sentence from him, it comes only after a great deal of effort, and the words that do come out are in a new muffled and wet, raspy voice that is unfamiliar to him, in addition to being a mere fraction of the amazing thoughts, ideas, and stories that are inside his mind.

To see my son struggle in a way that he never has before is hard on my heart. To have him respond to my question of, “Does anything hurt? Show me where your pain is,” by pointing to his heart, nearly shatters mine. And though I am the eternal seeker of silver linings and over half-full glasses, in these moments with him, I am telling him, first, “Yes, buddy. This is so hard. It’s okay to be sad. We are all a little sad. I would be more concerned if you weren’t sad. Yes, it’s okay to cry. Please do cry. Yes, I have cried too.” I let him emote for a little while, but then I fill that cup of his, also reminding him how much strength he has, how incredibly full of courage he is, how much I love him and how much everyone loves him, and that he is amazingly resilient. I have him focus on the good things he has right now, on the things he is grateful for, which typically have been, these last few days, and not necessarily in any particular order, the PlayStation 4 that we brought into his room and also me being there.

I know that some of his fog has lifted due to the fact that he is finally off all narcotics, as of today, which has brought back his focus on reading, his jigsaw puzzle skills, something he literally couldn’t do only a few days ago, and was so hard to watch, since he is typically a puzzle genius, and in general, has brought back more of my boy. He will continue to be on some other medications to ease his anxiety and other mental woes, but we are gradually getting him off as many as possible, at a safe and healthy rate. Yes, it is true that he is doing well, compared to where we were a month ago when he was intubated and sedated, unable to move, with no clear plans of how to get him to even attempt to breathe on his own again. He is awake and can spend a good portion of his day hours off of the ventilator. He is taking short walks, without the walker and just holding hands and the guardrail. He is smiling. Sometimes. I see many bits of the Giacomo I have always known, but the reality is, he will never be the same again. I would be fooling myself to believe anything else and to try to convince him of that same false optimism. Does this mean that life at the end of this maze will be bad? No, I don’t believe that it will be, but it will assuredly be different.

And how am I? On the whole, I am well. I am looking forward to getting out of this maze, but in the meantime, I am grateful that I get to walk a lot of it with my guy, G. He and I have always been very much in sync, able to read each other’s minds and emotional states, and help each other out at the precise right moments, which is definitely making this whole experience and maze easier to navigate. And while I have definitely been giving a lot to him these days, I am also on the receiving end of his well-timed mood boosters. Case in point, when a guy who never built a garage for us, after I paid a deposit and then changed my mind, over a year ago, called the other day asking me for an additional $337 to cover his expenses, I shared with him a few choice words about why I would not be paying him, out of earshot of G. When I returned to sit on the bench with him, despite is own sadness and frustration, he sensed that I was irritated and made this message for me on his “Mood Meter” app, which helps one to identify emotions and work through them, stating that at moment, he was feeling “Loving” because “I am so grateful for my Mom’s,” as he undoubtedly improved my mood instantly. 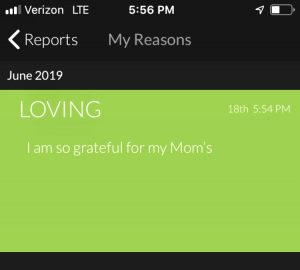 We are moving forward, through this maze, though sometimes we are also moving backward in order to get on the right path. Sometimes G has days that aren’t so good, where he’s struggling to breathe, needs a long nap in the day, and needs a whiff of oxygen to keep his levels where they need to be. Sometimes I think we are getting closer to leaving, only to find that really nobody has a clue when that might be. We will continue to be strong, to have courage, to love each other, and to be resilient until we, and all of our irons, balls, and plates get out of this maze.