This Is Terrible. Keep Going.

Late last night we got some preliminary results of the MRI: no tumor, no aneurysm, no bleeding, no stroke, no surgical damage, no traumatic brain injury (the last three of which we already pretty much knew.) The only apparent thing was what appears to be an infection in his sphenoid sinus, which is deep and in the back of the cranium. This is a little odd since he has not even a single possible symptom of a sinus infection. So, is this enough to cause him to have paralysis of this hypoglossal nerve? Well, it wouldn’t seem so. However, of course, after I got the news, I was up very late last night scouring medical journal articles to try to find a connection and did find ONE case of a person who had a mucocele (fancy word for a cyst) in the sphenoid sinus that caused this crazy tongue activity, which was subsequently removed and all was well again.

This prompted me to request a page to ENT to come take a look at Giacomo today. Their definition of “taking a look” was to send a resident (someone I have had previous negative condescending interactions with) to come wake him up this morning by shining a flashlight in his eyes and asking him to stick his tongue out, a visit that I interrupted when I returned to his room after trying to have a calm morning cup of coffee. I politely asked her to step out of G’s room and stop her military-esque interrogation of him, asked that she send the real doctor (okay—that was mean, but I was so irritated,) and informed her that I felt her bedside manner left something to be desired. Shortly after, I began to shed my first tears of what has been an entire day full of them, as my frustration levels are climbing.

During morning rounds things continued to escalate as my concerns and desires to find an answer, since the easiest possible solutions were disproven by the MRI, were brushed aside, with comments such as “yeah, there just might not be an answer,” “he’s not showing any other symptoms,” and “we’re not going to do anything too invasive to figure out what’s going on.” While I agreed with their ideas about NOT doing unnecessary surgeries, as I reminded them that surgery alone could kill him, I didn’t really agree with the notion of not figuring out WHY this rare symptom was occurring, especially since everything I have found speaks to the fact that this is not a completely benign occurrence, it always means something is going on, and it shouldn’t be overlooked. You all can do the same basic research, and will likely find the same thing. Dig deeper and you likely will be moderately terrifed as words like “ominous” pop up in the medical literature.

Now, I’m not trying to be the queen of gloom and doom over here, as that cup of mine remains over half-full, I just want an answer. And I don’t want to be ignored or dismissed as a crazy mom. See, I’ve been down the path of the ignored mom before, given the fact that I spent 2006-2010 being brushed off by providers who told me that there was “nothing wrong” with my son, that he “would outgrow it,” and that I was “looking for something that wasn’t there.” Oh, that’s right–my intution was right and turns out he’s got myotonic dystophy. And let us not forget the events of May 21st of this year and the days that led up to it in which I shared with all those providers that I feared he wouldn’t breathe on his own once extubated after his jaw surgery and then watched him nearly die in front of me. And just to make matters more interesting, here’s a little known fact: In 2001, I, myself, had a crazy mass in my left frontal sinus that eroded through all of the bone of the sinus and began working its way into my brain, something caught by a doctor who had a little inkling to do further testing, that ulimately saved my life, as he estimated that I would have been dead within four months had he not operated.

So take all that in, plus throw in a 3-month-long ICU stay riddled with mishaps, and you’ll have to pardon me if I am not ready to just accept their causal “we’ll talk to the speacialists and see what they have to say, but there may not be an answer” attitude. You’ll have to understand why my heart has ached all day, my stomach has a huge pit in it, and my eyes have welled and spilled with tears for the bulk of the last 24 hours.

Howevever, tonight as I was 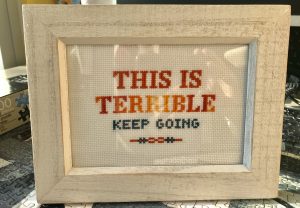 getting ready to take my three littlest littles home from the hospital to finally eat dinner at 7:00, after waiting for specialists that never came to talk with me about what might be going on, I was comforted by three things:

1. This fabulous little piece of art that my dear friend and fellow caregiver gave me the other day, reminding me that “This is terrible. Keep going.” It is now a fixture of our ICU suite and will likely become part of our home decor as well.

2. Katy Perry on the radio, reminding me, “I’ve the the eye of a tiger, a fighter, Dancing through the fire, ‘Cause I am a champion, And you’re gonna hear me ROAR.”

3. My youngest daughter, my sweet Isadora, after asking me if I was done crying for the moment, reminding me, “Mom, you just need to keep being strong and keep having resilience. Isn’t that what you taught us??”

Yes, my dear child. I am not crying (right now.) Let’s keep going. This is terrible. Let’s be strong. Let’s roar. We are resilient.