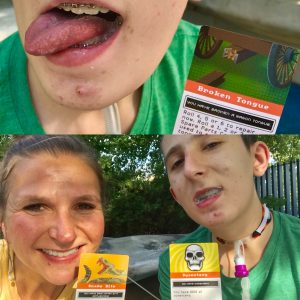 If you were in elementary or junior high school sometime in the 80’s, there is a pretty strong likelihood that you played one of the most intense games ever (or at least of its time,) “The Oregon Trail,” that would leave you dying instantly from some calamity or another, as you attempted to make your way from Missouri to Oregon, much like the pioneers of the 19th century. And if you are a cool kid of the 2000’s, you are now enjoying that classic “live, die, or catch typhoid” thrill as a card game, much like my boy, G, is. It is through this game, and its cards of calamity, that Giacomo has requested I give you all updates as to what is going on, via a rendition of “Two Truths and a Lie.” Of these three cards: “Snake Bite,” “Dysentery,” and “Broken Tongue,” two of these things are calamities he is truthfully experiencing at the moment, and one of them is a falsehood.

As you make your guesses, here is a bit of the very mild calamities of the last month…Overall, we have been in a pretty decent holding pattern with Giacomo lately, with only a few bumps in the trail on our journey from the ICU to home. We have been dealing some transient heart rate issues, with a wavering between mostly too high and a bit too low, that have resolved for the moment, with no apparent ca 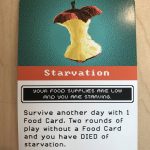 use for them coming or going, so it will be a thing to “keep an eye on.” We’ve also had more weight issues as he lost about 10 pounds, over the course of the last 2.5 months here in the ICU, but has finally almost regained it back!! Ordinarily, I would have suggested another “100-Pound Pizza Party,” however, he is unable to take in anything–food, water, and certainly not pizza–by mouth at the moment, so that would actually be more of a punishment than a celebration. And in case you’re wondering, his NPO status is indefinite for the time being. There was a discussion of repeating the swallow study in six months, but if you keep reading, you’ll see why that may or may not even matter, as one of the calamities that have recently arisen may change the course of our venturing down the trail.

So, now that you’ve made your guesses, here it is:

Truth #1: “Dysentery.” Okay, so it’s not exactly dysentery, but without going into too much detail, this guy may as well have it, for the number of times he has to run to the toilet each day. In addition, he has had a few bouts of vomiting that finally seem to have subsided. For the last month, we have experimented with volume, flow, and schedule of his formula feeds, as well as adding in baby food green beans (which bulk
thing 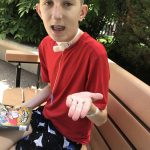 s up due to the pectin) directly to his tube, and most recently trying some “Real Food Blends,” which is a product of real food designed for tube feeding. None of this seems to even touch his modern-day ICU dysentery. The good news is that despite all this, he is gaining weight, so again, it’s not going to kill him, as it did his Oregon Trail comrades of days gone by, but nonetheless, it’s super annoying and frustrating.

Truth #2: “Broken Tongue.” Yep. It’s not his wagon, but what you see–his tongue deviating strongly to the right– is what actually happens when Giacomo attempts to stick out his tongue, something we first noticed a few days ago when he was brushing his teeth. I brought it up in rounds the next day, along with a request to have speech come back and take a look. At first, I wondered if was nerve damage from his jaw surgery, though I felt that I would have noticed this before. My belief that this was a new thing was confirmed by the speech pathologist who reported to me that she has had him stick his tongue out on several occasions since we’ve been here. She explained that this was a pretty clear symptom of his 12th cranial nerve, the hypoglossal nerve, being affected, damaged, and/or having some pressure on it. I could tell from her tone that this was a problem, though she didn’t elaborate too much on her suspicions, other than to question me about other things that I knew were to rule out if he had a stroke and to let me know that we needed to get his neurologist to take a look. She also inquired about any other changes I had seen, which prompted me to think about the Monopoly game I had played with G a couple of days back in which he was having an incredibly difficult time counting the dice, the squares to move, and making change was nearly impossible. At that time, I dismissed his inability to do basic math, thinking maybe he was just tired, but now my brain was spinning, wondering if something else was impacting my Monopoly whiz, something he’s excelled at since about age 5.

During rounds yesterday, this tiger mama, mind racing from the conversation the day prior with the speech pathologist, as well as some late-night Google searches for “damage to hypoglossal nerve causes” that didn’t bring on any reassurance, did NOT accept the idea of casually paging neurology at some point, but rather insisted that they get in touch with the neurologist who has been following all of the kids for the last 8.5 years, knowing that he would want to be consulted. Not only did he want to be consulted, but he showed up yesterday afternoon to take a look himself and do a full examination of G.

The results?? This deviation of his tongue is not normal. This is a classic and unique symptom of something impacting the hypoglossal nerve (just as speech had said.) It is very unlikely that he had a stroke. It is also very unlikely to have resulted from his surgery that happened over two months ago. This isn’t necessarily a tumor (but go ahead and Google yourself and you will find that there is a decent po 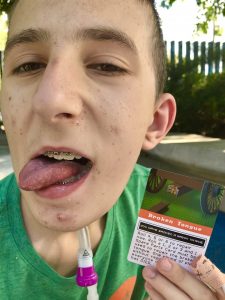 ssibility of that, as well as the small handful of other things that it could be, none of which are great, such as ALS, an aneurysm, or infection of the brain stem.) We need to figure out what is going on. The next step is an MRI to get some answers.

As you may imagine, I want this MRI done yesterday, but to make matters more complicated, they can’t do it with his braces on because of all of the metal in his mouth, so we are now in another holding pattern, as we figure out if we can get someone from the orthodontics clinic or possibly the orofacial maxillary surgery clinic to come over here and remove them. Knowing that I won’t stop bugging them until we get this done, the doctors are messaging back and forth, to de-metal his mouth as soon as possible, though that will likely not happen until Monday.

In the meantime, we will just wait. And hope. And try to stay positive. And keep our sense of humor, because this is certainly another time in life where if you don’t laugh, you will cry, which is exactly what G did when he drew this “Broken Tongue” card during our game. He took one look at it, and for a split second, his face got very serious, then he looked at me, stuck his now-crooked tongue out at me, and said, “Look Mom, I’ve got a broken tongue!!”

So, this leaves the “Snake Bite” as the “Lie,” in our “Two Truths and a Lie” game. Though now that I think about it, there is maybe some truth to it. While neither G nor I have met our death by the poisonous venom of a snake, I will say that this whole “Broken Tongue” thing feels like a pretty huge bite in what was seemingly becoming a smoother ride down this road of recovery, making us all feel a bit like those pioneer settlers who I suspect were probably wise to never feel too comfortable, as one just never knows what calamity might be next on the trail.